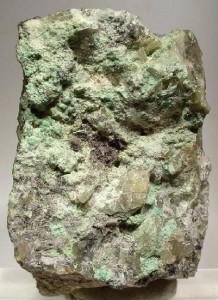 Early evidence of Chinese turquoise can be found in the bronze plaque with turquoise overlay from the Erlitou culture site in Henan Province. It is even said that Marco Polo reported turquoise found in present-day Sichuan.

The preferred stone for most Chinese jewelry and carvings is traditionally jade which is why evidence of early Chinese turquoise is sparse.  This, however, is not to say that all areas of China prefer jade to turquoise.

The Tibetans use turquoise more than any other gemstone. Believed to contain metaphysical powers such as good luck, it is worn in rings, bracelets, necklaces and adornment directly on hats and other clothing. It is also believed that turquoise properties contain healing powers. The Tibetans even use necklaces of felt with turquoise to adorn their domestic animals such as horses.

The greens vary from bright green to forest green and of course blue-green shades. Chinese turquoise serves as an excellent source for green turquoise jewelry. Chinese turquoise is usually stabilized with a clear epoxy to harden and seal it.  This seal stabilizes the turquoise making the stone durable and resistant to the elements.

Northwest of Shanghai is the Ma’ashan turquoise mines, and the Hubei Province produces turquoise in colors reminiscent of the now closed mines in Nevada—the turquoise that comes form China is often compared to the type produced from areas like Nevada.

Today China has mines that produce a great deal of turquoise because of the perfect elements. Turquoise is formed in shallow surfaces and in arid regions such as southwestern United States, Turkey, Persia and Sinai Peninsula. Because of these reasons, Chinese turquoise mines are typically found the Hubei Province.

Turquoise from the Hubei region sometimes obtains the brilliant blues long favored by turquoise enthusiasts. This blue coloring is much like the favored Persian turquoise coloring. Notable Chinese turquoise mines include: Juangcheng mine, the Jinliantong mine, and the Labashan mine all in the Zhushan of the Shiyan Prefecture.

Chinese turquoise may have started as a lesser-used stone in comparison to Persian turquoise or Egyptian turquoise but today the world looks to China for most of its supply for this increasingly valuable gemstone. With the many civilizations that have adorned the robin’s egg blue to blue-green gemstone, it’s safe to say turquoise is only becoming more popular with age. And as the stones reserves and mines begin to diminish, the value will only continue to rise.